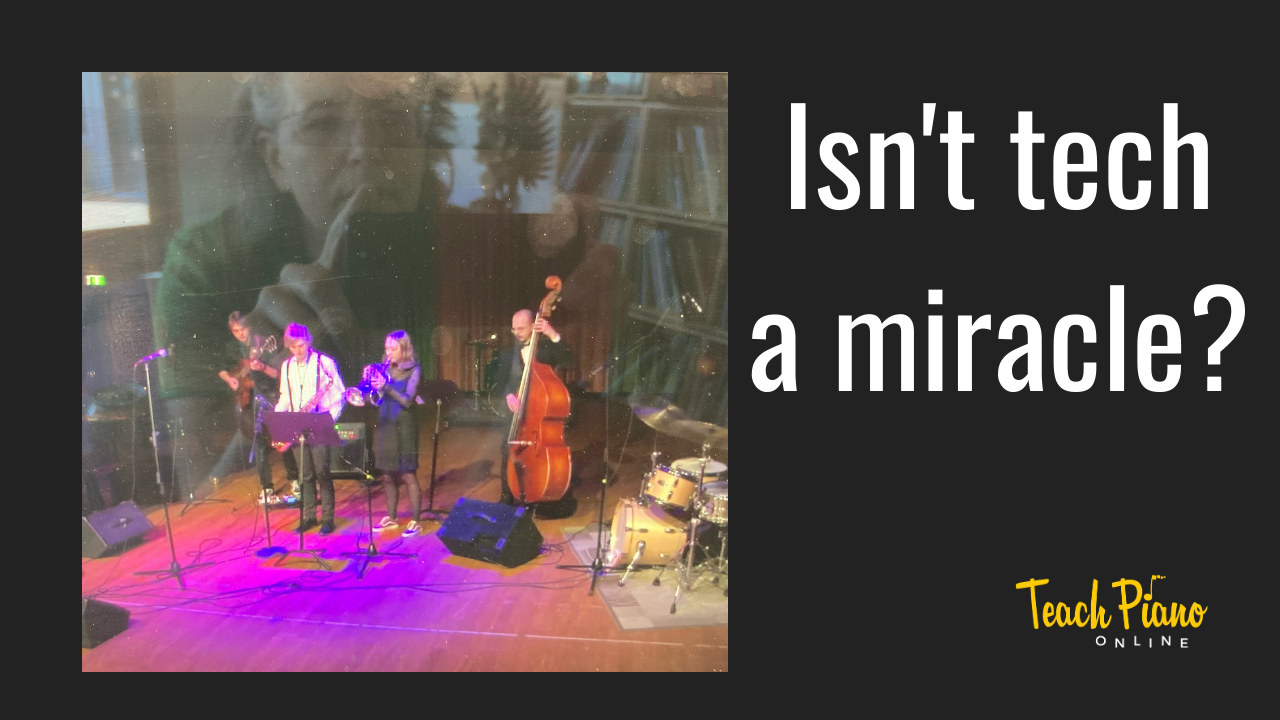 Don't you love the picture?! I look like I am some sort of mad scientist who shrunk a group of musicians and put them in a box.

Nikolai played in a concert at Toneheim Folkehøgskole earlier this week. Toneheim is a folk university in Norway, students often are in the Folkehøgskole system for a gap year while they decided what to do.

Last year the school was closed in March, so Nikolai went back. I haven't seen him in person in over a year. He may or may not come home this summer. I only plan as far as coffee in the morning these days. They were very fortunate this year, their school is small enough and everyone lives on campus. They have been in one great big musical bubble. And, because of COVID, their concerts are live-streamed, recorded, and saved.

The first time I live-streamed a recital was around 10 years ago when I was still in Saudi. One of my good friends was in the United States undergoing chemotherapy. She couldn't make it to her daughter's recital, so it was live.

The best we could do was adequate, and a connection, and important to all of us, but by today's standards, it was primitive. Think one step beyond a dial-up modem, and hooking up a video camera to the back of a TV.

The Jazz Concert that my son played in was the third concert the school live-streamed. Each concert has consistently gotten better--the sound quality, where the microphones were set up, the lighting, and the camera angles adjusted.

It's worth talking about this because I think that live streaming recitals and concerts is going to continue to be a thing, even after the pandemic. How many parents, grandparents, friends, and family members want to watch performances of their loved ones but can't make it because of distance, disabilities, other commitments, or time zones?

For all teachers, not just online ones, live streaming concerts should be a part of what we do. It connects us all.

I shared Nikolai's concerts with my father before he died, with the nursing home where my mother lived, with my husband's family in other parts of Norway. It makes me feel connected to a global community.

Miracle or Monster?
future recitals live streaming concerts online teaching video for online teaching
Mar 17, 2021
Latency- what it is and why it matters
internet midi latency online teaching teaching piano online tech issues
Mar 12, 2021
5 to 7 years with time off for good behavior
teaching adult students who's it for
Mar 01, 2021
Close

Sign up to our newsletter and you will have this awesome online teaching tool in minutes!